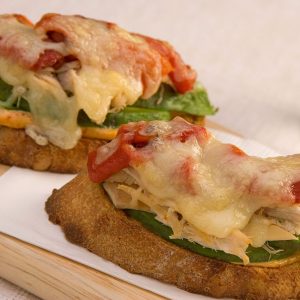 Print
Prep time
15 mins
Cook time
2 mins
Total time
17 mins
Canned chipotle peppers can be found in the Mexican section of most grocery stores. You only require one pepper in this recipe but the remaining peppers will keep for 2 to 4 weeks in an airtight container in the refrigerator.
Author: Alberta Chicken Producers
Serves: 4
Ingredients
Instructions
Notes
Make ahead: The melt is best made just before serving.

Roasting Peppers Tip:
Preheat a broiler, barbecue or grill pan to medium high heat.
Brush the peppers with oil and place on a baking sheet.
Roast under the preheated broiler, turning occasionally. for about 10 minutes until skin is blistered and blackened.
Place in a large bowl, cover and let stand for 10 minutes.
Peel away and discard the skin from the peppers.
Cut open each pepper and scrape out and discard the seeds and membranes.
Cut the peppers into thin strips.
Place in air tight container and add some oil (about 1 to 3 tablespoons) and a pinch of salt and pepper.
Store in the refrigerator until ready to use.
3.5.3229