"It was a great transition", says Erna Ference of the decision her and her husband Reg made more than 20 years to leave the city and begin farming. 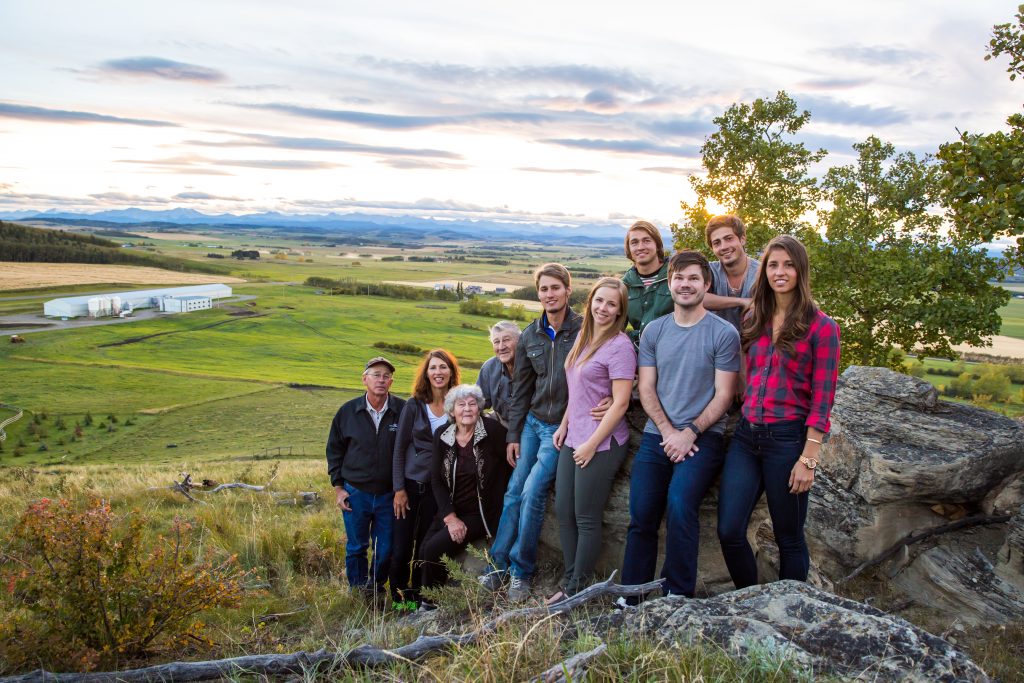 Born in Ontario and raised north of Toronto in Sutton, Erna began her working life as a legal secretary at a law firm in downtown Toronto. Commuting back and forth from Sutton to Toronto (more than an hour’s drive each way), and the prospect of moving downtown wasn’t for her, so she headed West to Alberta during the oil boom of the 1980s for new opportunities.

She got a job with a law firm in Calgary, and not long afterwards, was offered a position with Canadian Western Natural Gas (now ATCO) where she met her future husband, Reg Ference. She also began working on her Certified Management Accounting (CMA) designation, which she continued after her and Reg were married. Due to an employee marriage policy, Erna left Canadian Western Natural Gas to take a position with another oil and gas company.

When they decided to start a family, Erna says they did not want to raise children in the city. "An opportunity came up to buy a broiler farm from Reg’s parents, and we thought that would be a good environment to raise children." So in 1988 they left corporate life behind to farm in Black Diamond, just west of Okotoks in the foothills. Erna says that the transition from working for someone else to being their own boss was a really nice change, and that one of the biggest lessons we learned was that when you are your own boss, everything is negotiable.

"It makes a huge difference, and I couldn’t believe how profound that lesson was," she says.

Soon after Erna and Reg bought the farm, Erna completed her CMA designation. She worked as a consultant for a couple of years while working on the farm with Reg and raising five children - Trevor, Byron, Andrea, Benjamin and Stephen. Erna and Reg recently welcomed their first grandchild.

They lived on the farm, located on the edge of town right across from the hospital in Black Diamond, for several years until Reg’s parents, who still had a smaller broiler operation about three miles further away, wanted to expand and later retire. Erna and Reg helped with this expansion, reduced their quota holdings and later purchased and moved to the newer location. Altogether, Reg and Erna now produce close to 110,000 birds each eight week period and farm on just over two quarters of land. They farm with their son Bryon and one hired hand.

Ference says she has always been involved with whatever the family has been involved with, from her children's soccer and hockey teams, to being involved with the Alberta Chicken Producers (ACP) board and the Chicken Farmers of Canada (CFC). Although too busy the first few years they ran the farm to even think about getting involved with marketing and regulation, Erna says Reg was asked to run for a board position with the ACP about 20 years ago, and he served as a director for six years and represented the ACP with the CFC. Not long after Reg stepped down, Erna says numerous people in the industry told her that she would be a good candidate and advocate for the industry. Prior to making her decision, she was able to benefit from a leadership program that was instituted within the ACP (a program Reg helped develop) that gave potential board members the opportunity to understand what being a leader means "before you take the big plunge," she says.

Erna is the current Chair of Alberta Chicken Producers. Prior to her current position, she spent seven years as a board director, serving as ACP’s national representative with CFC for four of those years. While with CFC she served on both the Finance and Executive committees, and spent three years as CFC’s representative on the Canadian Federation of Agriculture (CFA) board of directors. Erna says she is enjoying being Chair, "It’s a different role than being a director, that’s for sure, but with amazing staff and fellow Directors and a very supportive and active membership, I feel that I am always learning and part of a great team." It is only through working as a team the ACP has been able to develop and implement successful programs such as On Farm Food Safety Program, Animal Care Program and Manuals for Chick Quality and Catching.

When she’s not busy with family and board activities, Erna says she enjoys being active with just about any outdoor activity. She only started running at the age of 40, and has since run numerous events from 5k to the marathon distance including the Boston Marathon. As for the future, Erna says she sees a healthy poultry industry and her son Byron and his fiance, Lisa taking over the farm. She sees herself perhaps being involved with a non-profit organization if she could find one that "benefited a lot of things that I value," she says. I am a big advocate of continuously learning, improvement and giving back" she says.

Back to on the farm
Scroll To Top